In Mancora and beaches nearby there is an interesting cooking style, largely determined by the freshness, quality and variety of seafood that is extracted from its shores. From tuna to fine grouper, shrimp shells to the coveted black mangroves grow in Tumbes, this long list of seafood mixed with the taste of the northern Peruvian cuisine, with challenging mixtures like the typical Majarisco (photo), hot dish based on green bananas and local seafood (shrimp, black shells, crabs, squid and octopus)
The ceviche is the emblem plate in Mancora and surrounding beaches; the freshness of a sea bass or grouper (mero murique) ceviche, always served 100% fresh, with camote (sweet potatoes) and chifles (fried slices of banana). Another amazing stew of northern cuisine is the vigorous Parihuela, a fish stock with all local seafood, including sometimes a lobster.

In addition to fish and seafood in Mancora, the most recommended non seafood dishes are the Copus (goat cooked in an underground wave) and the Seco de  Chavelo, prepared with seasoned beef and fried green bananas, which offers only in some restaurants.

Some dishes of Mancora and nearby beaches cuisine: 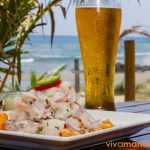 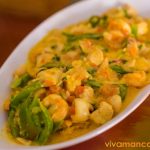 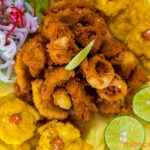 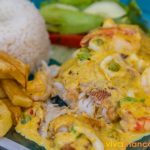 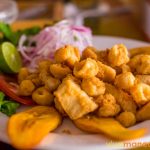 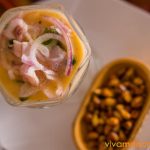 In addition to the northern cuisine, Mancora boasts an impressive variety of cuisine, this in large part because of several restaurants created and managed by Lima and foreigners people who decided to stay in this magical resort. From Italy to Mexico, from Austria to Lima, the variety is great considering that no more than a hundred restaurants in Mancora.

Our favorites restaurants and bars of Mancora and nearby beaches

Bananas Cafe Restaurant offers delicious meals and sandwiches, plus a full menu with combos at very good prices. From morning breakfast to pizzas at night, everything here is cooked with fresh products of the day. Our central location in panamericana and close to the surf point, is ideal for all audiences, from families with children to foreign tourists.